How charities use geospatial data: research findings from a study of UK organisations 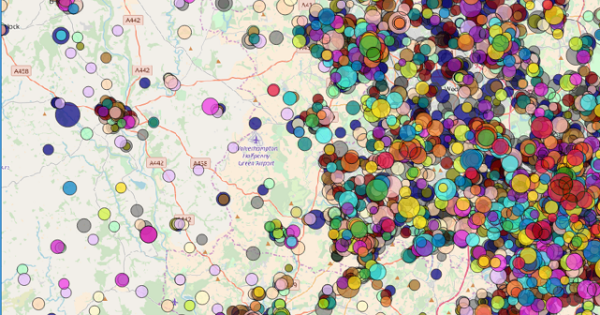 Charities are increasingly making use of sophisticated geospatial data. James Bowles, a researcher into charity data, looks at how.

“Everything happens somewhere” says the adage. If you’re a charity, it can be very useful to know what is happening where. To find that out, you need geospatial data.

Geospatial itself is an uncomfortable mix of Ancient Greek and Latin, which means “to do with a particular location” - more or less. Postcodes, coordinates, and administrative boundary codes all give data a geospatial reference.

My PhD research looks at the different ways that 35 charities in the UK use geospatially referenced data and geographic information systems (GIS). Sometimes this was as a one-off, sometimes it was part of their ongoing work.

I’ve summarised the findings in a way that I hope is widely applicable. Please do feel free to get in touch if you’d like to know more.

Asset maps are used to display the location of things that charities think users need to know. This could be , members, other organisations, boundaries, grants, or volunteers. They’re used frequently for both internal and external purposes. At its most basic, an asset map can be an analogue map with pins in it or a Google MyMaps directory of member organisations. Asset maps require significant investment of time and finance to ensure their accuracy, and therefore there are few examples of comprehensive asset maps that have been routinely updated and maintained. One exception to this is a custom-built asset map that is coordinated and hosted by a regional religious charity. The map gathers data on events that are happening in the region through manual submissions and automatic feeds from partner organisations.

The most widely observed use of geospatial data by charities is to directly inform current and/or future service delivery. Volunteers for environmental charities mark out habitat areas or document missing signage along pathways. Grantmaking organisations use data on need to frame their priority areas or guide the decisions of donors. Social service charities use postcode and demographic data to guide their current work and identify geographic areas where future demand for their services is likely to be high.

Interactive map of qualitative research data by a healthcare charity.

Geospatial data can provide the evidence base from which charities can begin advocacy efforts and contest and propose policy. Local support and advice charities aggregate anonymised data from the queries they receive, and use it  to help them act as an expert voice when informing MPs of the challenges in their constituency, or policymakers of the challenges affecting their area of focus. National campaigns are often aided by maps that display issues of spatial inequality:

“From a campaigning point of view those sorts of visualisations are hugely compelling things that are often picked up effectively on social media” (Senior Analyst, Development and Housing charity).

Geospatial data is used to engage stakeholders for financial purposes, such as demonstrating demand or impact in grant applications, or using geodemographic classifications to target fundraising appeals. Charities use visualisations of gaps in supply or existing demand as conversation starters when brokering new relationships and partnerships. Citizen knowledge is crowdsourced through interactive mapping platforms and used to engage new supporters and develop brand and cause awareness.

It is often assumed that charities are unsophisticated in their choice of data, but the 35 organisations studied demonstrated a more nuanced reality, where a continuum of complexity runs from using secondary data as part of a software as a service (SaaS) package, to gathering real-time primary data on service users.

Except for environmental organisations that use aerial imagery or photographs to monitor habitat condition, all primary data sources are analysed statistically or visualised in a GIS. Organisations frequently analyse and visualise internal data on the location of their service delivery. Spatially referenced data on members, service users, grant beneficiaries, donors, and visitors (commonly held in CRMs) constitute significant primary data resources. More innovative sources include GPS data on people’s movements (with consent) and the use of web scraping tools and geolocation APIs which allow online activity to be spatially located.

A more limited range of secondary data is used, often as a means of contextualising and enriching primary data or making a loose inference about stakeholders / geographic areas. The English Indices of Multiple Deprivation (IMD) is widely used, as well as available public health data. Geodemographic classifications, such as Experian’s Mosaic are used to infer interests and behaviours of donors and stakeholders. The only secondary data pertaining specifically to the nonprofit sector is data accessed from 360Giving’s GrantNav, on the grants given and received by the sector. It is notable that none of the 35 charities I spoke to said they used the Charity Commission’s Register of Charities.

Access to data is highly dependent upon the issue the charity is concerned with; it is much easier to gather data on the spatial distribution of grants given to youth organisations, than on the prevalence of homelessness in a city, for which data is typically provided at the local authority level. The ONS Open Geography Portal is widely praised for its comprehensive repository of look-up tables and boundary files provided in multiple formats. There is some evidence of inter- and intra-sectoral data sharing arrangements existing, albeit with certain tensions and conflicting interests present. ‍

For large organisations that routinely use geospatial data, ESRI’s GIS products (ArcGIS, ArcGIS Collector etc.) are used as part of enterprise-level agreements which ensure formats, storage and analysis are unified and realise an aspiration of drawing on a ‘single source of truth’. Despite ESRI offering a significant discount for nonprofit organisations and tiered enterprise agreements, the cost of access makes it prohibitive for small and medium-sized organisations. QGIS serves as a powerful free and open-source alternative to ESRI’s products, with several interviewees referring to the ideological appeal of using free and open-source software and languages (QGIS, PostGIS, R, Python), even if the organisation paid for ESRI products. For organisations that lack the technical or financial capacity to use QGIS or ESRI products, Google MyMaps and Batchgeo serve as useful tools for easily visualising tabular data, with some customisable options available. Notable for its low technical barriers is OCSI’s Local Insight platform, used by three of the grantmakers studied to gain access to secondary data on a variety of socio-economic and demographic indicators, and overlay custom point data or polygons.

For organisations who are early-on in their data maturity journey, Excel is typically used to sort, aggregate and visualise data on members or grant applicants by postcode area. For several organisations, business intelligence/data analysis and visualisation tools that aren’t intended solely for visualising spatial data, but can do so (such as Tableau, Microsoft’s PowerBI, and Alteryx), meet operational needs. Tableau in particular is praised for its intuitive user interface and cross-organisational appeal, however, the cost of licences is considerable and can prove prohibitive. While programming languages such as R and Python offer geospatial capability, they are typically used for pre-visualisation cleaning and analysis of large scale structured and unstructured datasets.

Unsurprisingly, large charities that routinely use geospatial data have the greatest capacity and strongest cultural support. In such cases, the work of GIS or data analysts operate as an internal consultancy service and are viewed as a core business function. Where organisations lack internal capacity, they partner with a university or consultancy to deliver a discrete piece of analysis or visualisation. The extent to which organisations rely on the skills of one or two staff members with strong geospatial analysis skills is striking. Often, staff members that display strong geospatial analysis skills have recently joined from private or public sector organisations and are transferring new and innovative ways of working into the charity. For example, an analyst at a large homelessness organisation used GIS skills learnt by previously working for a supermarket chain to optimally locate a new set of charity shops.

Organisational culture towards data use varies significantly between charities. Top-down support often comes from an appointed ‘data champion’ at senior management level, or a trustee who works in a data-driven environment. Where the adoption of geospatial data use is driven from the bottom-up, individuals develop prototypes of exploratory pieces of analysis in their own time to demonstrate its utility and gain buy-in from senior management.  Despite varied uses of data, analytical tools, capacity, and organisational cultures, growing internal and external demand for data-driven work that included geospatial analysis of some kind is observed across the cases, with many interviewees outlining their next steps or ‘geospatial wish list’ should capacity arise.